In their return to Exactech Arena, the Florida Gators showed no mercy against Florida A&M in a dominating 102-62 win. Without Kyle Lofton (back) or Will Richard (knee), the Gators leaned offensively on 23 points from Trey Bonham and 17 from Kowacie Reeves, both season highs for the guards. Forward Alex Fudge accomplished the first double-double of his career with 16 points, all in the second half, and 10 rebounds.

IT WAS OVER WHEN: Kowacie Reeves’ one-hand slam to start the scoring. In his first start since the win over Florida State, it didn’t take long for Reeves to find the bucket with a strong drive to the basket and a one-hand slam to score the game’s first points. Even with Kyle Lofton and Will Richard out for Florida, the Rattlers virtually had no chance in this one.

Startin' with a bang ?

THEY STOLE THE SHOW: Trey Bonham. With Lofton out, Bonham stepped into his spot as the primary ball handler and completely took advantage of the rattled Rattler defense. He started a perfect 5 for 5 from deep with 17 total points in the first half, including a buzzer beater 3-pointer. On the night, the transfer from VMI finished with 23 points while going 7 for 7 from deep, a career-high in total made and percentage.

Buzzer-beater 3 for @bonham_trey to end the half! Already 17 points and a perfect 5-5 from deep

THESE STATS DON’T LIE: Florida A&M turnovers. Defensive woes hurt Florida against West Virginia, but defensive wins led to the dominant performance against the Rattlers. On the night, the Gators forced an impressive 19 total turnovers and scored 29 points off those takeaways.

THIS MATCH-UP PROVED KEY: Florida’s new guard rotation versus Florida A&M’s experienced guards. With both Will Richard and Kyle Lofton out with injuries, Bonham took over most of the point guard duties while Reeves and Riley Kugel took the other two guard spots. With the Rattlers’ two starting guards Jordan Chatman and Jordan Tillmon leading their squad with 9.8 points per game each, it was crucial Florida’s new rotation shut them down, only allowing 3 total points between the two.

UP NEXT: The Gators remain at home as the calendar turns to December with a matchup against Stetson on Sunday, Dec. 4. Tipoff is at 2 p.m. with television coverage on the SEC Network. 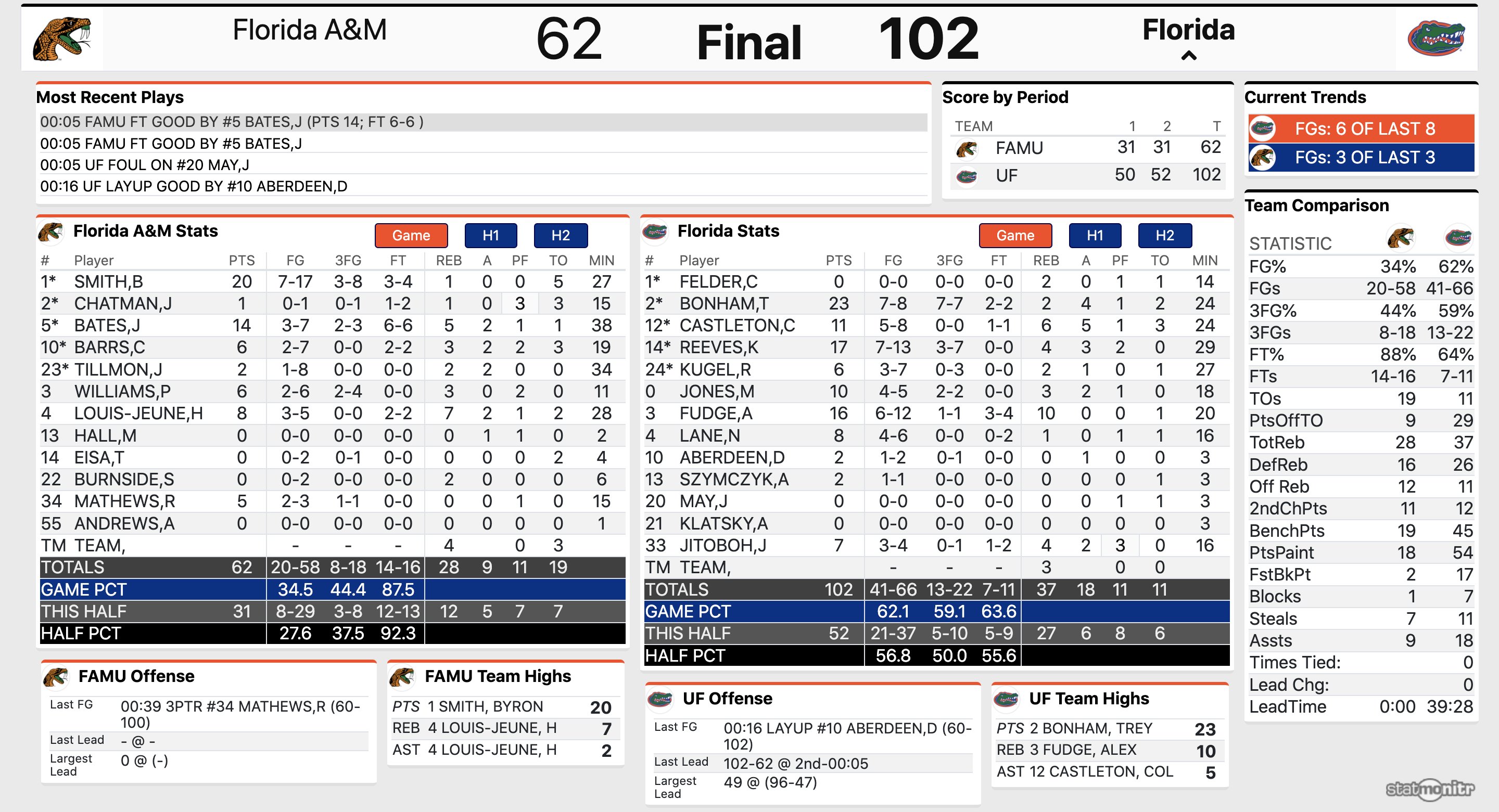