Instant Analysis: Florida falls to 2-2 with heartbreaking loss to Tennessee

IT WAS OVER WHEN: Anthony Richardson’s pass with 6 seconds left was intercepted by Kamal Hadden to end the game. Really, it should have been Richardson’s fumble at Tennessee’s 13-yard line, but somehow, Florida stayed in the fight after a Montrell Johnson touchdown rush to put the Gators down five and a Diwun Black onside kick recovery to give the Gator offense one more chance. There were plenty of opportunities for Florida to win, and there were plenty of opportunities for them to lose, but it wasn’t decided until the final play for the third time this season.

THEY STOLE THE SHOW: Hendon Hooker. Tennessee’s starting quarterback did it all passing for 349 yards and 2 touchdowns while adding 112 yards on the ground with another touchdown. Florida couldn’t do anything to stop him defensively. Florida did have a few brutal busted coverages, but Hooker took advantage of them and made the most of the opportunities the Gator defense gave him. Richardson played excellent for Florida as well going for a career-high 453 yards and his first two touchdowns of the season while adding two scores on the ground. However, Hooker stole the show on almost every drive for the Volunteers.

THESE STATS DON’T LIE: As easy as it would have been to put Tennessee’s 348 passing yards, there was one glaring stat in favor of Florida that kept them in the game. On fourth down, Florida went 5 for 6 on fourth down. Florida’s five conversions kept them in the game, even when the defense was giving up touchdown after touchdown. However, Florida’s one miss on fourth down on their first drive forced them to play from behind the most of the game. These numbers also do not include Adam Mihalek’s missed 50-yard field goal. While fourth-down conversions kept them in, the two early miscues cost them down the road.

THIS MATCH-UP PROVED KEY: Tennessee’s pass offense vs. Florida’s defensive backs. To put it bluntly, Florida’s defensive backs, who are arguably the most veteran on the team, played like true freshman seeing the field for the first time. Florida gave up passes of 70 yards, 43 yards and 45 yards while allowing a total of 349 passing yards. Keeping the trend with the rest of his career so far, Hooker did not turn the ball over through the air. Hooker shined against a defense back group that looked lost most plays, and it gave Tennessee the win.

WHAT A PLAY: Despite a rough day for the Gators, Keon Zipperer shined when his number was called catching # passes for ## yards and a touchdown, Florida’s first touchdown reception of the season. His 44-yard score in the second quarter was initially a 23-yard catch in which he broke three tackles while spinning around two defenders. Florida’s first touchdown pass of the season certainly was stylish, even in the loss.

Anthony Richardson has his first passing TD of the season🐊

UP NEXT: With the loss, Florida drops to 0-2 in SEC play to begin the Billy Napier-era. Come Monday, don’t expect the Gators to be ranked in the AP Poll after being ranked the last three weeks. Although Richardson looked like the Richardson that played against Utah, there are still plenty of question marks regarding play calling on offense and personnel decisions on defense. Florida returns home for a tune-up game next week against Eastern Washington at noon. 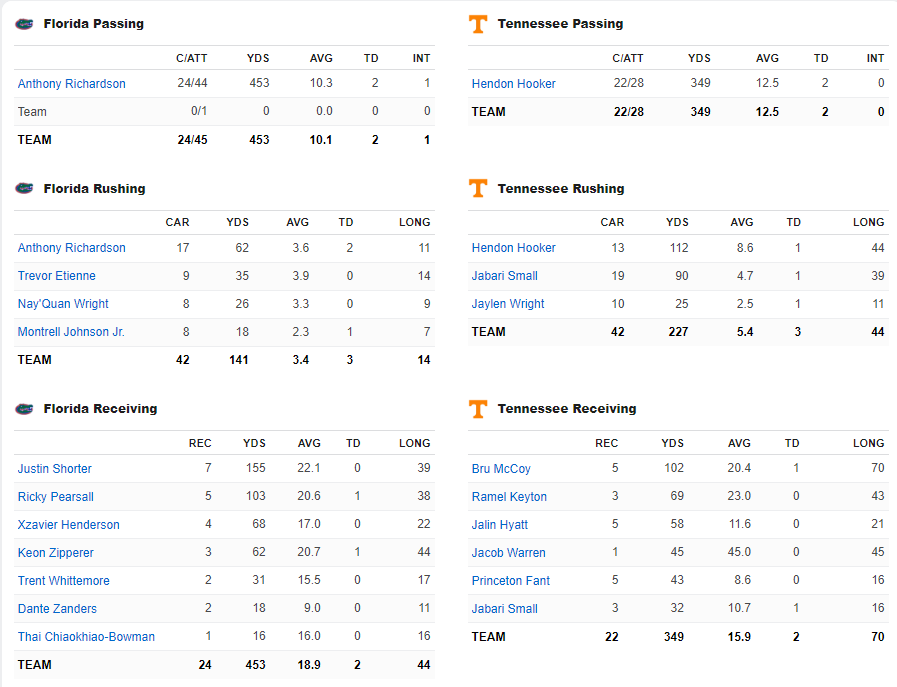 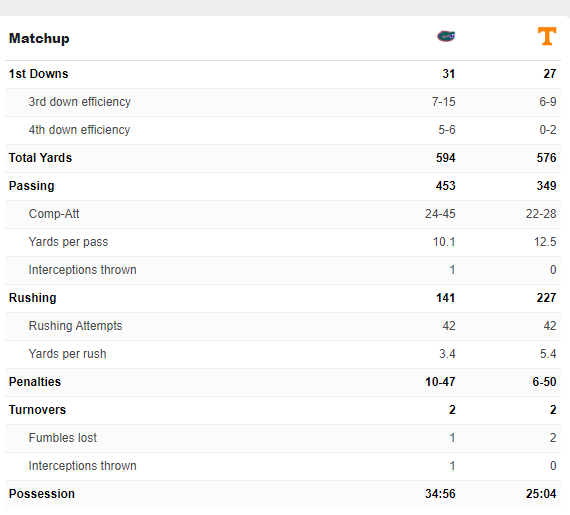